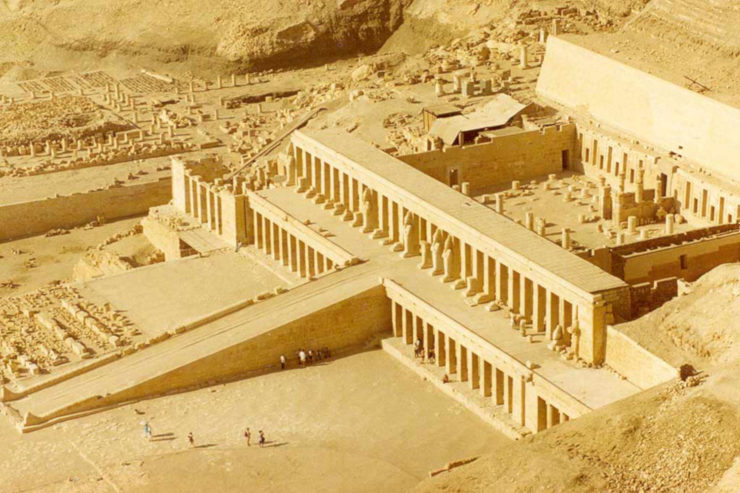 One of the signature actions expected of every Egyptian pharaoh was the commissioning of monumental construction projects. These projects would celebrate the achievements of the pharaoh’s reign for all eternity, demonstrate their devotion of the gods and generate employment for Egyptian farmers during the annual Nile floods.

Colossal construction projects nurtured unity through a collective building endeavour, fostered pride amongst Egyptians in their contribution to the communal effort and provided a public demonstration of balance and harmony enshrined in the concept ma’at the core value at the heart of Egyptian culture.

Amongst the most imposing of these mighty construction projects was Queen Hatshepsut’s (1479-1458 BCE) mortuary temple at Deir el-Bahri.

Facts About The Temple of Hatshepsut

Hatshepsut began construction of her mortuary temple sometime after ascending the throne around 1479 BCE. The temple was designed to narrate her life story. Its elegant design far surpassed any other previous temple in grandeur. Designed by Hatshepsut’s steward and confidante Senenmut, the temple adopted Mentuhotep II’s temple as a baseline while extending it, making it more expansive, more elaborate and longer.

Mentuhotep II’s temple featured a large stone ramp leading up from an initial courtyard to its second level. Hatshepsut’s second level was accessed via a significantly extended and even more elaborate ramp. It passed through manicured verdant gardens and a lavishly decorated entrance pylon flanked by soaring obelisks.

Strolling through the ground level, visitors one could either proceed directly through flanking archways leading down courtyard to use small ramps to reach the second level, or walk up the vast central ramp. Lion statues bounded the main ramp’s entrance. Once on the second level, visitors discovered dual reflecting pools with sphinxes lining the path to another ramp, which conveyed visitors up to the temple’s third level.

The temple’s first, second, and third levels all featured colonnades with ornate paintings, statuary and reliefs. The second courtyard was intended for Senenmut’s tomb set to the right of the ramp leading up to the third level. It was a suitably lavish tomb located beneath the second courtyard employing no external flourishes to preserve the tomb’s symmetry of design. In the execution, all three levels typified the emphasis traditional Egyptian design placed on symmetry.

On the left side of the ramp leading up to the third level was the Punt Colonnade whilst the Birth Colonnade occupied a similar position on the right. The Birth Colonnade narrated the tale of Hatshepsut’s divine creation where she was fathered by the god Amun. Details taken from the myth of the night of Hatshepsut’s conception was inscribed on the walls outlining how the god appeared before her mother.

As the daughter of Egypt’s most popular and powerful divinity, Hatshepsut was asserting supporting evidence for her rightful claim to govern Egypt as a man would. Hatshepsut established her special relationship with Amun early in her rule to negate criticism of her reign stemming from her gender and its disruptive effect on ma’at.

The Punt Colonnade depicted her majestic expedition to mysterious Punt, the fabled ‘land of the gods.’ Due to the prodigious cost of outfitting an expedition and the time-consuming nature of the journey, Egyptians had not visited Punt in several centuries. Hatshepsut’s ability to finance this expedition is a testimony to the enormous wealth Egypt enjoyed under her successful rule. The expedition also underlines the extent of Hatshepsut’s ambition. The ancient Egyptians had known of the enigmatic land of Punt ever since the Early Dynastic Period (c. 3150 – c. 2613 BCE), however, either knowledge of the route had lapsed and Hatshepsut’s predecessors regarded an expedition as justifying the cost regardless of the glory to be found in reviving this traditional trading route.

To the south of the second level colonnade was the Temple of the goddess Hathor, while to the north sat the Temple of Anubis. Hatshepsut’s position as a powerful woman implied a special relationship with Hathor and Hatshepsut invoked her name frequently. A temple dedicated to Anubis, the guardian of the dead, was common in many mortuary complexes.

So magnificent was Hatshepsut’s temple at Deir el-Bahri that later Egyptian kings built their own tombs nearby in the legendary Valley of the Kings.

Cut into the living rock of the Deir el-Bahri cliffs, the magnificent Temple of Hatshepsut is one of the world’s most magnificent examples of ancient architecture. It makes a bold statement about Hatshepsut’s power and the success of her reign.