Initially, ancient Egyptians used 700 to 800 signs. By c. 300 B.C. this written language had ballooned to encompass more than 6,000 signs. Daily life or nature appears to be the inspiration for many of these additional hieroglyphs. 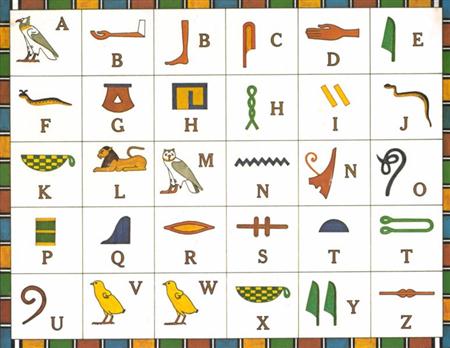 Facts About The Hieroglyphic Alphabet

The Evolution Of Hieroglyphs

The word hieroglyph itself is Greek. The Egyptians called hieroglyph medu netjer or ‘God’s words.’ The ancient Egyptians revered hieroglyphs as a sacred gift from Thoth. This may have prompted their initial use on sacred structures, such as temples and tombs. Later, hieroglyphs formed the basis for writing sacred texts such as the Pyramid Texts, the Book of the Dead and The Coffin Texts.

Only the elite of Egyptian society such as the royal family, nobility, priests and scribes were able to read hieroglyphs. These groups comprised less than three per cent of the Egyptian population. A basic mastery of hieroglyphs involved knowing 750 signs. A master scribe memorized more than 3,000 hieroglyphs.

Scribes were educated at special schools with some scribes beginning their formal training at 12 years of age. Students practised on wood or clay block and started by memorising 200 different hieroglyphs. Coloured ink was used for pictures, while black ink was used for words.

The Structure Of Hieroglyphs

Today, Egyptologists structure Egyptian hieroglyphics into three distinct classes with some images belonging to more than one class.

Ancient Egyptian legend has it that Thoth their god of writing, magic, wisdom, and the moon created writing to ensure the ancient Egyptians would be wise and to improve their memory.

Re the Egyptian creator god and sun god disagreed. He believed gifting hieroglyphs to humans would prompt them to neglect their oral history traditions in favour of relying on written documents. Writing argued Re would weaken the Egyptian’s wisdom and memory.

Despite Re’s reservations, Thoth gave writing to the scribes, a select few amongst Egyptians. Thus in ancient Egypt, scribes were well respected for their knowledge and writing skills. Consequently, the position of a scribe was one of the few paths offering an opportunity for upward social mobility in ancient Egypt.

The Waning Of Ancient Egyptian Hieroglyphs

During the Ptolemaic Dynasty (c. 332-30 BCE) followed by the Roman Period (c. 30 BCE-395 CE), the influence of first Greek then Roman culture steadily grew. By the second century CE, Christianity had made inroads into the influence traditionally wielded by Egypt’s cults. As the Coptic alphabet, a development of the Greek uncial alphabet spread, the use of hieroglyphs waned as Coptic became the final ancient Egyptian language.