Temple of Edfu (Temple of Horus) 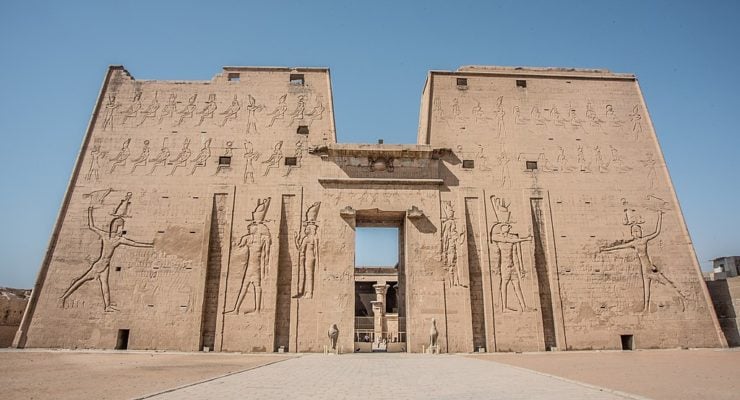 Today, The temple of Edfu in Upper Egypt between Luxor and Aswan is one of the most beautiful and best-preserved in all of Egypt. Known also as the Temple of Horus, its exceptionally well-preserved inscriptions have provided Egyptologists with remarkable insights into ancient Egypt‘s political and religious ideas.

A colossal Horus statue in his falcon form reflects the site’s name. Inscriptions in the temple of Edfu confirm it was dedicated to the god Horus Behdety, the ancient Egyptians sacred hawk usually depicted by a hawk-headed man. Auguste Mariette a French archaeologist excavated the temple from its sandy tomb during the 1860s.

Facts About The Temple of Edfu

The temple of Edfu was constructed in three phases:

Evidence suggests the Temple of Horus required nearly 180 years to complete its construction phase. Building on the temple site began under Ptolemy III Euergetes in c. 237 BC. Inscriptions suggest it was finally finished around c. 57 BC.

The Edfu temple was constructed on top of a site that the ancient Egyptians believed to be that of the epic battle between Horus and Seth. Oriented on a North-South axis, the Temple of Horus replaced a previous temple that appears to have had an East-West orientation.

The temple displays traditional elements of a classic Egyptian architectural style blended with the Ptolemaic Greek nuances. This majestic temple sits at the heart of the cult of three divinities: Horus of Behdet, Hathor, and Hor-Sama-Tawy their son.

The Temple of Edfu consists of a primary entrance, a courtyard, and a shrine. The Birth House, also known as the Mamisi sits to the west of the primary entrance. Here, every year the Festival of Coronation was staged in honour of Horus and the pharaoh’s divine birth. Inside the Mamisi are several images telling the story of Horus’ celestial birth overseen by Hathor the goddess of motherhood, love, and joy, accompanied by other birth deities.

Undoubtedly the Temple of Horus’ signature architectural features is its monumental pylons standing at the temple entrance. Inscribed with celebratory battle scenes of King Ptolemy VIII vanquishing his enemies in honour of Horus, the pylons tower 35 metres (118 feet) into the air, making them the tallest surviving ancient Egyptian structure.

Passing through the primary entry and between the colossal pylons visitors encounter an open courtyard. Decorated capitals top the courtyard’s pillars. Past the courtyard lies a Hypostyle Hall, the Court of Offerings. Dual black granite statues of Horus grace the courtyard.

One statue looms ten feet into the air. The other statue has been shorn of its legs and lies prostrate on the ground.
A second, compact Hypostyle Hall, The Festival Hall is positioned past the first hall. Here is the temple’s oldest surviving section. During their many festivals, the ancient Egyptians would scented perfume the hall with incense and decorate it with flowers.

In ancient times, only the High Priest was permitted into the Sanctuary. The sanctuary is home to a shrine carved from a block of solid black granite dedicated to Nectanebo II. Here a series of reliefs show Ptolemy IV Philopator worshipping Horus and Hathor.

The inscriptions found at the temple of Edfu provide a fascinating insight into the cultural and religious beliefs of ancient Egypt in Ptolemaic times.

Top 23 Symbols of Loyalty & their Meanings