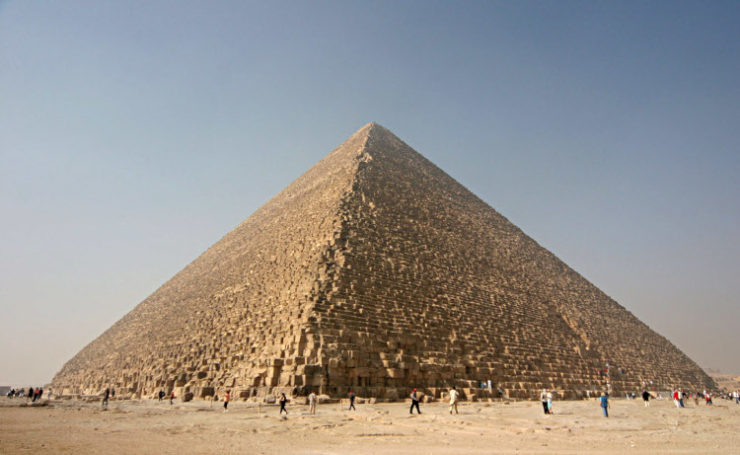 Anyone who has ever gazed upon the Great Pyramid of Giza (also known as the Pyramid of Khufu or Cheops) can only stand in awe of the amazing achievement of its builders. From the Fourth Dynasty Pharaoh Khufu to its architect the Pharaoh’s vizier Hemiunu, to the team of an estimated 20,000 labourers and skilled tradesmen who laboured for twenty years to complete the pyramid, it is a marvel of human vision and ingenuity.

As both the oldest Seven Wonders of the World and the only one remaining comparatively intact, the Great Pyramid of Giza was the world’s tallest man-made building for over 3,800 years until 1311 AD, until the spire on the Lincoln Cathedral was completed.

Even with today’s advanced computerized technology and heavy-lift machinery, it would be challenging to reproduce the precision found in the pyramid’s construction or to replicate the adhesive strength of the mortar that binds its massive stone blocks together.

Facts About The Great Pyramid of Giza

While the engineering behind the Great Pyramid of Giza is legendary, Khufu’s intent in building his pyramid has always been the subject of spirited and often contentious debate amongst Egyptologists, historians, engineers, and popular scientists.

Although many pyramids have proven to be tombs, opinions differ as to the purpose of the Great Pyramid. The position of its internal shafts, the alignment of the Great Pyramid with the constellation of Orion’s three stars, its complex of smaller pyramids and the absence of any evidence that anyone was ever buried in the pyramid, suggests it may have been designed with an alternate purpose in mind. Moreover, the pyramid’s sides are aligned almost exactly with the cardinal points of the compass.

The smooth, angled, gleaming white limestone sides of the Great Pyramid symbolized the sun’s rays and were designed to assist the king’s soul in ascending to heaven to join the celestial gods, particularly Ra, the Egyptian sun god.

Other commentators contend the Great Pyramid was built for other purposes:

Built somewhere between c. 2589 and c. 2504 BC, the majority of Egyptologists subscribe to the theory that the Great Pyramid of Giza was built as the Pharaoh Khufu’s tomb. The Pharaoh’s vizier Hemiunu is believed to be both its primary architect and the overseer of its construction with the labyrinth of logistical support required during the pyramid’s construction.

Over time, the Great Pyramid of Giza has actually shrunk as it gradually shed its protective outer layer of limestone casing stones together with the cumulative effects of earthquakes and environmental forces such as erosion from wind and rain.

Even using contemporary standards, the precision with which the Great Pyramid was constructed is amazing. The base of the pyramid varies only 15 millimetres (0.6 inches) from the horizontal plane while the sides of each base are within 58 millimetres of being equal on all sides. The massive structure is also aligned on a true north-south axis with a minuscule 3/60-degree margin of error.

Current estimates of the time taken to construct the Great Pyramid vary from ten years to up to 20 years. Assuming its construction took 20 years, that would have necessitated laying and cementing about 12 blocks per hour or 800 tons of stone blocks daily, 24 hours a day, seven days a week. The Great Pyramid’s 2.3 million blocks are estimated to weigh from two to as much as 30 tons each, while the roof of the King’s chamber is built from nine stone slabs weighing approximately 400 tons in total.

The Great Pyramid is actually an eight-sided structure, rather a four-sided one. Each of the pyramid’s four sides has subtle concave indentations, which can only be seen from the air and match the curvature of the earth.

Supporting such a colossal structure requires an immensely stable and robust foundation. The plateau the Great Pyramid sits on is solid granite bedrock. Moreover, the foundations of the pyramid’s cornerstones were built incorporating a ball-and-socket form of construction. This enables the Great Pyramid of Giza to withstand earthquakes and substantial temperature fluctuations while maintaining its essential structural integrity.

While chemical engineers have been able to identify the chemical composition of the mortar used in the Great Pyramid, modern scientists have been unsuccessful in their attempts to duplicate it in the laboratory. Intriguingly, the mortar has proven to be stronger than the stones it binds and continues to firmly hold the stone blocks in place.

Recent evidence suggests the pyramids were constructed using a volunteer workforce of thousands of skilled craftsmen and unskilled labourers. Each year as Egypt’s vast agricultural fields lay inundated by the Nile floods; the Pharaoh mobilized this workforce to work on his monumental construction projects. Some estimates indicate that as many as 200,000 skilled labourers were used in the construction of the Giza pyramid.

Only three pyramids were ever fitted with a swivelling door. The Great Pyramid is one of them. While the door itself weighed nearly 20 tons, it was so finely balanced that it could be readily opened from the inside. So flush was the external fit of the door, identifying it from the outside was impossible. Even when its position was discovered, its smooth external surface lacked a handhold to gain purchase on. The pyramids of Khufu’s father and grandfather are the only two other pyramids found to conceal swivelling doors.

Gleaming A Blinding White In The Sun

When newly completed, the Great Pyramid of Giza had a layer of 144,000 white limestone casing stones. These stones were extremely reflective and so gleamed brightly in the sunshine. Composed of highly polished Tura limestone, their angled sloping faces reflected the sunlight. Some Egyptologists have even suggested that the Great Pyramid may have been visible even from space. Little wonder then that the ancient Egyptians called the Great Pyramid “Ikhet” or glorious light.

In 1303 AD a huge earthquake loosened the Great Pyramid’s layer of casing stones, dislodging many of the blocks. These loose blocks were subsequently pillaged for use in building temples and later, mosques. These depredations have shorn the Great Pyramid of its sleek external finish and left it open to the ravages of the weather.

The Great Pyramid of Giza’s interior is far more labyrinthine than other pyramids. It comprises three primary chambers. There is an upper chamber known today as the King’s chamber. The Queen’s chamber is located in the centre of the pyramid, while an unfinished lower chamber lies at the base.

Due to the volume of the stone blocks, the Great Pyramid’s interior hovers consistently at 20 degrees Celsius (68 degrees Fahrenheit), seemingly immune from the Giza plateau’s scorching summer desert environment.

When they were initially discovered, the Great Pyramid’s internal shafts were assumed to primarily serve ventilation purposes. However, contemporary research has demonstrated that these shafts were precisely aligned towards individual stars of the Orion constellation. Robert Bauval an Egyptian engineer found Giza’s cluster of three pyramids was aligned with the three stars in Orion’s Belt. Other pyramids were found to align with some remaining stars in the constellation of Orion’s Belt. Some astronomers have pointed to the orientation of these shafts as evidence they were designed to enable the soul of the Pharaoh to journey to these stars after his death, enabling his final transformation into a heavenly god.

The King’s chamber contains a coffer carved from a block of solid granite. How the ancient Egyptians managed to hollow out such a massive block of granite remains a mystery. The coffer cannot fit through the confined passages of the Great Pyramid suggesting it was put in place during the pyramid’s construction. Similarly, while Egyptologists argue the Great Pyramid was intended to act as the Pharaoh’s tomb, no evidence has been discovered that anyone was ever buried in the coffer.

When it was initially explored, no hieroglyphs were found inside the pyramid. Marks naming a work crew were subsequently discovered. In 2011 the Djedi Project announced it found painted red hieroglyphs in a room leading off a shaft from the Queen’s chamber angled upwards towards the King’s chamber. Waynman Dixon a British engineer found a black diorite ball and a bronze tool in one of these shafts. While the purpose of these objects remain obscure, one hypothesis suggests they were associated

While the role of both finds remains unclear, they may have been associated with a sacred rite, “the opening of the mouth.” In this ceremony, performed by the pharaoh’s son, the son opened his deceased father’s mouth to ensure his father could drink and eat in the afterlife and to restore his deceased father to life. This ceremony was usually performed using a sacred adze, an implement fashioned from meteoric iron, which was extremely rare in those times.

The Great Pyramid of Giza was built to endure for an eternity. Built by the Pharaoh Khufu roughly 4,500 years ago, how and why they were built has baffled Egyptologists, engineers and visitors alike ever since.