Geb: Egyptian God of the Earth 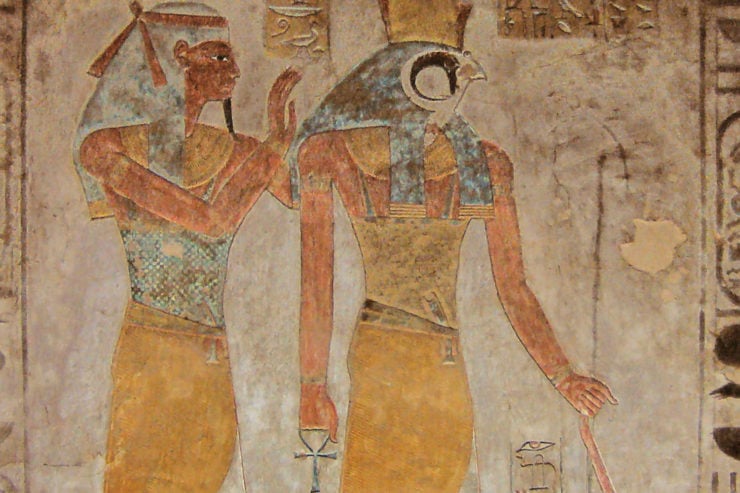 Geb was the ancient Egyptian god of the earth. He was also one of the second generations of the nine gods who formed the Ennead of Heliopolis. Also known as Gebb, Kebb, Keb or Seb,  Geb was the third divine pharaoh. He reigned after succeeding Shu, his father and before Osiris ascended the throne. Geb supported Horus’ claim to the throne after Osiris was murdered.

The Egyptians believed their pharaoh was the living embodiment of Horus. Hence, one of the pharaoh’s many titles was “Heir of Geb.”

Geb’s grandfather was the creator god Atum his father was the Egyptian god of the air Shu. His mother was the goddess of moisture, Tefnut. Geb and Nut his sister-wife and goddess of the sky produced four children Osiris, Isis, Nephthys and Seth.

In one ancient Egyptian creation myth, Ra the sun god and grandfather to Nut and Geb became angry because Geb and Nut were entwined in an eternal embrace. Ra ordered Shu to separate them. Shu achieved this by standing on Geb and lifting Nut far up into the sky overhead, thus creating the atmosphere by splitting the earth from the sky.

Geb wept at being separated from Nut, so creating the world’s great oceans. However, by this time Nut was pregnant and birthed Osiris, Isis, Nephthys, Horus the Elder and Seth into the world.

The Ptolemaic Dynasty Phakussa Stele recounts Geb´s obsession with Tefnut his mother. Geb’s father Shu battled the believers of Apep the serpent. Shu was greatly exhausted after this skirmish and retired to the heavenly plain to recover. In Shu’s absence, Geb searched for his mother, eventually raping her. Nine turbulent days of storms and darkness followed this criminal act. Geb tried to supplant his father as Pharaoh during his absence, but as he touched the ureas or cobra on Re’s crown, it detected Geb’s guilt and reacted to his crime by killing all his confederates and badly wounded Geb. Only by applying a lock of Ra’s hair was Geb saved from certain death. Despite these missteps, Geb proved himself a great king who safeguarded Egypt and his subjects.

Geb was typically portrayed in human form wearing the combined crowns of pharaonic Upper Egypt’s white crown together with Lower Egypt’s Atef crown. Geb was also commonly shown in the form of a goose, or with a goose’s head. The goose was Geb’s sacred animal and the hieroglyph of his name.

When Geb is portrayed in human form, he is usually lying prone to personify the earth. He was also sometimes painted green and shown with vegetation sprouting from his body. Ancient Egyptians claimed barley grew on his ribs. As a god of the harvest, Geb was occasionally viewed as the spouse of the cobra goddess Renenutet, while as the embodiment of the Earth Geb is often shown lying down underneath Nut the sky goddess. He leans casually on an elbow while bending one knee upwards mimicking the outline of a valley between two mountains.

Egyptologists believe the worship of Geb started during the Pre-Dynastic Period in the area surrounding Iunu or Heliopolis. However, there is evidence supporting the view that Geb worship followed that of the Aker cult another earth god. During Egypt’s Ptolemaic Dynasty, Geb became identified with Kronos the Greek god of time.

The majority of cultures around that time associated the earth with female power. Ancient Egyptians believed Geb to be bisexual hence Geb was a rare male earth god. Within his temple, at Bata in Heliopolis, Geb laid the Great Egg symbolising renewal and rebirth. The Sun god emerged from the Great Egg in the form of a sacred ben ben bird. Geb was called “The Great Cackler” in reference to the bird call he allegedly made after laying his egg.

Earthquakes were believed by ancient Egyptians to be Geb’s laughter. Geb was also a god of caves and mines. He created the precious stones and minerals mined from the earth. The cartouche used to indicate his name became connected with the Nile’s lush farming land and vegetation.

Geb claimed dominion over the tombs buried in the earth and assisted with the ritual of the weighing of the deceased’s heart in the Halls of Ma’at. Geb trapped those dead whose hearts were adjudged as being weighed down with guilt, deep in the earth or underworld. Thus, Geb was both a benevolent and a malevolent deity, imprisoning the dead in his body. A representation of Geb was often painted on the base of a sarcophagus, showing his protection of the justified dead.

Role In The Pharaoh’s Accession Ritual

In the ancient Egyptian Book of the Dead, the Pharaoh states, “I am decreed to be the Heir, the Lord of the Earth of Geb. I have union with women. Geb hath refreshed me, and he hath caused me to ascend his throne.”

One ritual conducted to mark the succession of a new king involved releasing four wild geese, each one flying towards the four corners of the sky. This was intended to bring luck to the new pharaoh.

The rich diversity of the Geb myth illustrates how multi-faceted ancient Egyptian beliefs about their gods could be and how divinities were envisioned as having families, complex social lives and unfettered desires much like their worshippers.

Top 23 Symbols of Life Throughout History

Top 23 Symbols of Change Throughout History

Top 20 Symbols of Balance Throughout History