Climate and Geography of Ancient Egypt 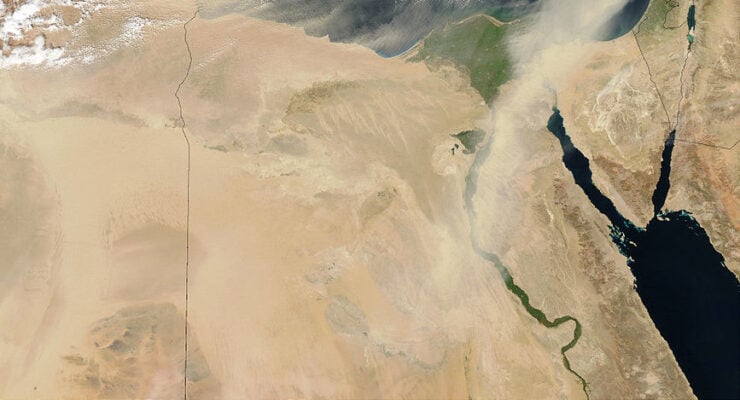 Geography shaped how ancient Egyptians thought of their land. They perceived their country to be divided into two distinct geographical zones.

Kemet the black land comprised the fertile banks of the Nile River, while Deshret the Red Land was the sprawling barren desert that spread out of much of the remainder of the land.

The only arable land was the narrow strip of agricultural land fertilized with deposits of rich black silt each year by the Nile floods. Without the waters of the Nile, agriculture would not be viable in Egypt.

The Red Land acted as the boundary between Egypt’s border and neighbouring countries. Invading armies had to survive a desert crossing.

This arid territory also provided ancient Egyptians with their precious metals such as gold together with semi-precious gemstones.

Facts About the Geography and Climate Of Ancient Egypt

Ancient Egypt is set in the North-Eastern quadrant of Africa. The Ancient Egyptian split their country into four sections.

The first two divisions were political and consisted of the crowns of Upper and Lower Egypt. This political structure was based on the flow of the Nile River:

Upper Egypt geographically was a river valley, about 19 kilometres (12 miles) at its widest and only about three kilometres (two miles) wide at its narrowest. Tall cliffs flanked the river valley on both sides.

Lower Egypt comprised the wide river delta where the Nile split into multiple shifting channels to the Mediterranean Sea. The delta created an expanse of marshes and reed beds rich in wildlife.

The final two geographical zones were the Red and Black Lands. The western desert contained scattered oases, while the eastern desert was mostly an expanse of arid, barren land, hostile to life and empty except for a few quarries and mines.

With its imposing natural barriers, the Red Sea and the mountainous Eastern Desert to the east, the Sahara Desert to the west, the Mediterranean Sea fringing the huge marshes of the Nile Delta to the north and the Nile Cataracts to the south, ancient Egyptians were enjoyed natural protection from invading enemies.

While these borders isolated and protected Egypt its location astride ancient trade routes made Egypt a crossroads for goods, ideas, people, and political and social influence.

Photo by Pixabay on Pexels.com

Ancient Egypt’s climate resembled that of today, a dry, hot desert climate with very minimal rainfall. Egypt’s coastal zone enjoyed the winds coming in from the Mediterranean Sea, while temperatures in the interior were scorching, particularly in summer.

Between March and May, the Khamasin a dry, hot wind blows through the desert. These annual winds trigger a precipitous fall in humidity while temperatures to soar over 43° Celcius (110 degrees Fahrenheit).

Around Alexandria on the coast, rainfall and clouds are more frequent thanks to the Mediterranean Sea’s influence.

Egypt’s mountainous Sinai region enjoys its coolest night temperatures brought on by its elevation. Here temperatures in winter can fall to as low as -16° Celcius (three degrees Fahrenheit) overnight.

The ruins of ancient Egypt’s colossal monuments feature massive stone edifices. These different types of stone tell us much about the geology of ancient Egypt. The most common stone found in ancient construction is sandstone, limestone, chert, travertine and gypsum.

The ancient Egyptians cut vast limestone quarries into the hills overlooking the Nile River valley. Chert and travertine deposits have also been discovered in this extensive network of quarries.

Other limestone quarries have been located near Alexandria and the area where the Nile meets the Mediterranean Sea. Rock gypsum was quarried in the Western desert together with areas near the Red Sea.

The desert provided ancient Egyptians with their primary source of igneous rock such as granite, andesite and quartz diorite for ancient Egyptians. Another prodigious source of granite was the famous Aswan granite quarry on the Nile.

Ancient Egypt’s mineral deposits in the deserts, an island in the Red Sea and in the Sinai, supplied a range of precious and semi-precious gemstones for jewellery making. These sought-after stones included emerald, turquoise, garnet, beryl and peridot, plus a wide array of quartz crystals including amethyst and agate.

Through history, Egypt has been known as the “gift of the Nile,” following Herodotus the Greek philosopher’s flowery description. The Nile was the sustaining source of Egypt’s civilization.

The Nile River vies with the Amazon River for the title of the world’s longest river. Its headwaters lie deep in the Ethiopian highlands in Africa. Three rivers feed the Nile. The White Nile, the Blue Nile and the Atbara, which brings rainfall the Ethiopian summer monsoon to Egypt.

Each spring, snowmelt from Ethiopia’s highlands pours down into the river, causing its annual rise. For the most part, the Nile River’s floodwaters were predictable, flooding the black land sometime in late July, before receding in November.

The annual deposit of silt fertilised Ancient Egypt’s Black Lands, enabling agriculture to flourish, supporting not only its own population but producing a surplus of grain to be exported. Ancient Egypt became Rome’s breadbasket.

Ancient Egypt’s Red Lands comprised its vast stretches of deserts spreading out on both sides of the Nile River. Egypt’s vast Western Desert formed part of the Libyan Desert and covered some 678,577 square kilometres (262,000 square miles).

Geographically it mostly comprised valleys, sand dunes and occasional mountainous areas. This otherwise inhospitable desert concealed a smattering of oases. Five of them are still known to us today.

Ancient Egypt’s Eastern Desert reached as far as the Red Sea. Today it forms part of the Arabian Desert. This desert was barren and arid but was the source of ancient mines. Unlike the Western Desert, the geography of Eastern Desert featured more rocky expanses and mountains than sand dunes.

Ancient Egypt is defined by its geography. Whether the Nile River’s gift of water and its nourishing annual floods, the Nile’s high cliffs which provided stone quarries and tombs or the desert mines with their wealth, Egypt was born of its geography.